Home EntertainmentCelebs Pat Carroll, the iconic voice of Ursula has passed away

Pat Carroll, the iconic voice of Ursula has passed away

Pat Carroll, the voice behind the iconic Ursula from The Little Mermaid has passed away at the age of 95.

An Emmy-winning comedic actress, Carroll brought one of the most famous villains to life through her portrayal of the sea witch back in 1989. However, before this, Carroll was an integral part of televised comedy’s dawn.

Moving to Los Angeles at the age of 5, Carroll would become immersed in Hollywood’s Golden Age. However, Carroll’s limelight would shine in the form of television. Her sketch in the 1956 Caesar’s Hour earned her an Emmy, and she would go on to guest star on numerous other shows including “The Red Skelton Show” as NowThisHer recalls.

According to The Hollywood Reporter, Carroll would often be called to make shows funnier – earning her accolade amongst many of the favourite male comedians at the time. Carroll also wasn’t just a comedic catch –  she also starred on Broadway in the Tony-nominated Catch a Star.

Carroll was described as boisterous and a master of impeccable timing. Her spark easily elevated The Little Mermaid to one of Disney’s most famous animations. 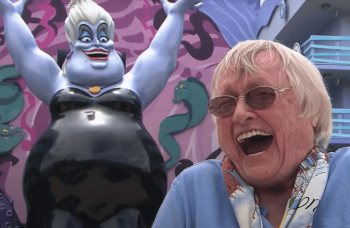 Ursula formed part of a new era of Disney magic and has been pinned as an icon of camp and drag fashion. The desire for Ursula to have her own spin-off film much like Maleficent and Cruella has long been desired, if not demanded by Disney fans, however, there is a live-action rendition of the classic film on the cards for 2023.

Carroll’s passing came as a result of a battle with pneumonia. She died in Cape Cod, as per THR.