Home EntertainmentCelebs The best moments from the Grammy Awards 2022

The best moments from the Grammy Awards 2022

It has been a wild awards season, especially with last weekend’s Oscars scandal! It seems the Grammy Awards tried to play it as safe as possible this weekend so as to not follow suit. But that doesn’t mean there weren’t some wonderful moments to look back on. Here are the highlights from music’s big night.

Around the world it has felt odd to celebrate, to be opulent and indulge while Russia continues to attack Ukraine. Throughout the night there were touching tributes to Ukraine, and while it is no substitute for action it was touching to see the Grammy Awards acknowledge the world outside of itself.

Amid performances Ukranian President Volodymyr Zelensky appeared virtually to address the crow and speak of the devastation suffered in Ukraine under the ongoing Russian invasion. He encouraged those at the event to ‘Fill the silence with your music,’ adding ‘Fill it today to tell our story.’ After this John Legend took to the stage for a moving performance of ‘Free’ alongside Ukranian musicians Siuzanna Iglidan and Mika Newton.

Tony Bennet was there

Well, sort of. The legend’s family announced last year that the singer was suffering from Alzheimer’s disease. But he still appeared at the Grammy Awards via video to introduce Lady Gaga who he shares a close relationship with. Lady Gaga performed two songs off their album Love for Sale which earned the pair a Grammy for best Traditional Pop Vocal Album on the night.

Women of the moment, Dua Lipa and Megan Thee Stallion recreated a fun moment paid homage to Whitney Houston and Mariah Carey’s brown dress showdown at the 1998 MTV VMAs. Like iconic musical divas Houston and Carey before them, the pair showed up on stage in matching Versace outfits. With the 90s being so in, this was a smart move from the Grammy Awards.

Lady Gaga showed us yet again that she really isn’t one! Even on a big night like the Grammy Awards. As songstress SZA made her way up to collect her very first Grammy on crutches, Lady Gaga stepped up to help her out. Making sure SZA’s train looked nothing but impeccable as she received her award, Lady Gaga fussed behind her. Imagine a multi-award winning artist helping you look your best for your award! We love to see women support women. 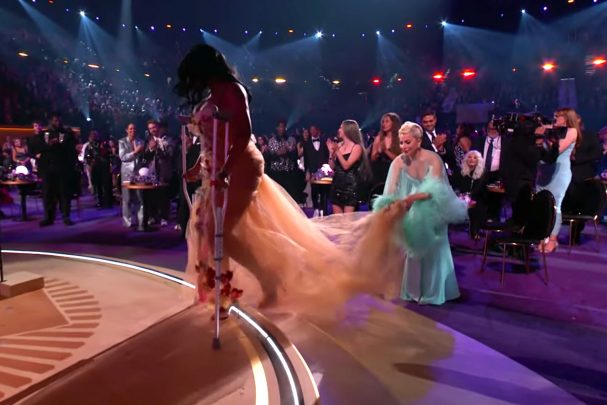 Popular South African DJ and producer is coming home a very proud man after scooping up the Grammy for Best Dance/Electronic Album for Subconsciously. Coming up alongside him on stage was his eldest son, Esona. During his acceptance speech Black Coffee turned to his son and made a typically South African remark that is half joke, half challenge saying ‘this is my first one [win] tonight. I have five more [children] at home. I am coming back with them.’

After the Grammy Awards stage he gave a special shout to ‘the African kids who are watching who come from where I come from who think they don’t have a chance.’

While there have been a few South African nominees at the Grammy Awards over the years, until now it is only Ladysmith Black Mambazo and the Soweto Gospel Choir who have won a coveted award.

Oscars 2022: glamour, icons, fashion and of course, the drama