When last did you leave your phone behind when heading out for the day? No, not forget (only to make a swift U-turn to rush back and get it), I’m talking about leaving it. On purpose. That’s what I did for two days straight on a recent trip to Sanbona Wildlife Reserve and I’ve never enjoyed myself more.

For one thing, your phone won’t do you much good out in the bush – there is no cell reception in the whole reserve. Sound ghastly? Sounds sublime to me. No constant checking for messages, social media notifications or emails. Instead, I thoroughly immersed myself in whatever I was doing at any given moment. Peering through my binoculars to spot a cheetah stalking springbok. Sipping on a glass of red wine by the fire. Kicking back in the outdoor hot tub, listening to baboons barking in the distance. Every little thing suddenly held so much meaning and my cell phone seemed … superfluous, out of place.

Even when I did reach the lodge’s WiFi in the communal lounge and restaurant area, I actually found myself not bothering to check the damn thing anyway. The indulgent buffet, twinkling stars in the clear night sky and undivided attention of my significant other were far more captivating. It was as if being away from the city and everything that would await me on Monday didn’t matter so much, or belong to another universe altogether.

The American naturalist and writer John Burroughs said: ‘I go to nature to be soothed and healed, and to have my senses put in order.’ And how often don’t our senses become muddled? A constant sensory overload has led me to feel numbed, dreary and exhausted. But as soon as I intentionally disconnected from the rat race and gave myself over to the rhythms of the earth, I began to see beauty everywhere and felt appreciation for Mother Nature. 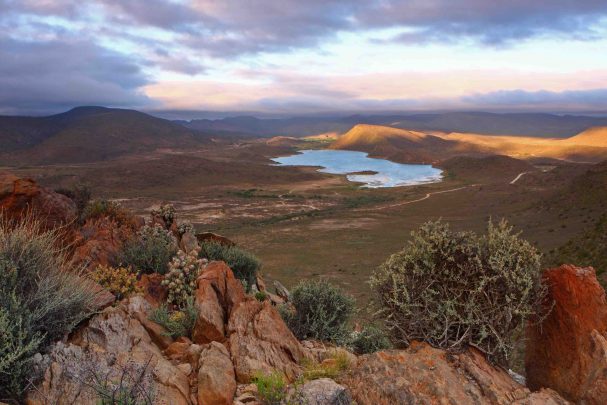 Located in the scenic Breede River Valley between Montagu and Barrydale in the Western Cape, Sanbona Wildlife Reserve covers a massive 58 000 ha of arid Klein Karoo landscape, of which the Succulent Karoo biome is a UNESCO World Heritage Site. Our clearly passionate ranger Jordan took us on daily safari drives, but instead of rushing around trying to squeeze in as much as possible, he leisurely stopped at several unique plant species and shared a wealth of knowledge about them. Life in the bush is slow paced, and each little part of the environment is treasured and enjoyed.

Here he pointed out the buchu plant and its endless medicinal uses, there the seepganna bush and how the ancient San people mixed its leaves with animal fats to make a body soap. And so after each drive, I arrived back at the lodge excited, my head spinning with all my newfound knowledge and eager to check various fauna and flora off my species list.

I’m not an experienced birder by any account, which is why it was also an absolute joy to have Jordan point out even the most common birds we came across, and then again revelling in the scarcer birds, such as the secretary bird majestically taking off as we approached.

Then, Jordan got intel over his two- way radio on a certain ‘Number 80’ on which there was ‘a visual’. Feeling like a top-notch tracker in a spy movie, I kept my eyes peeled as we headed to the location. Jordan whipped out his satellite tracker until we detected ‘Number 80’ – a magnificent female cheetah!

Locating her on top of a koppie, lazily stretched out with a full belly, Jordan guided us towards her on foot until we got closer than I ever thought I’d come to a wild cat. Looking at the cheetah, who was aware of us but clearly unfazed by our presence, I was in awe of how regal – and at the same time lethal – this animal was. Cheetahs are the fastest land animal in the world, reaching up to 95 km per hour in three seconds. And yet somehow, this spotted beauty in front of me had striking similarities to a goofy house cat as she played with a large log. Jordan quickly reminded us that Number 80, as all wild animals, should be treated with the utmost respect. The reason their animals don’t have names and are only referred to by number, reinforces this belief: To mentally create a disparity between humans and animals, and to avoid starting to think of them as pets. 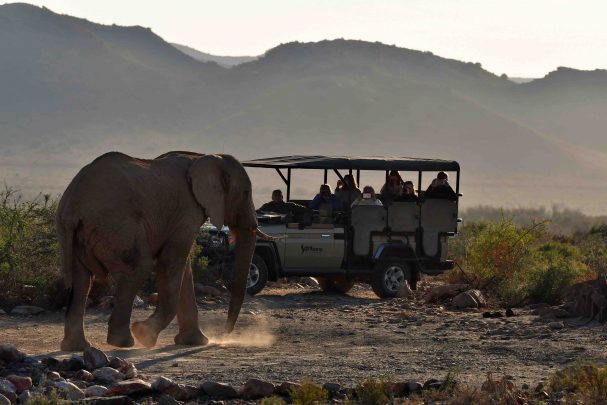 Back at the lodge, I was surprised to find I was never bored between game drives. I could either be found reclining in the outdoor hot tub or rinsing off in the outdoor shower, doing nothing but admiring the rock formations and thorn trees surrounding me. With the novelty of absolute privacy came the liberating feeling of exhaling in the most symbolic sense of the word, and an acute personal attuning. For the moment, there was only me and the vast natural expanse, and I felt more at home than ever before.

Modern city life offers many good things, but what it doesn’t have is silence – a rare commodity. Late-night quiet in the city doesn’t compare, when everyone is asleep but there’s still the dogs barking next door, or sirens in the distance and the faint humming of the fridge. Out in the bush, I experienced complete lack of sound, save for the wind or the rush of a bird’s wings as it swoops by. At Sanbona, I realised that I haven’t been silent, or let utter silence enfold me, in years, and it was time to relish this tranquillity.

Taking a short walk up to a cave in the mountains, Jordan showed us ancient San rock paintings that are estimated to be nearly 8 000 years old. I looked out from the cave, down into the valley and over the mountains; nothing in between except bushveld. The name of the reserve is a combination of the word bona (‘to see’ in Sesotho) and ‘San’ (referring to the people) and is loosely translated as ‘the vision of the San’ or ‘what the San saw’. I suddenly felt small and insignificant. And isn’t that what nature does best? It reminds us that we are not a world within ourselves; that we are all part of an age- old system, a collective being that is so much greater than any one human.

Nature has never needed us. Quite the contrary. We need it, and the only way to preserve it is to get close to it, reconnect and learn its secrets.