Suzuki have been on a roll lately. 2020, the annus horribilis for the globe was Suzuki South Africa’s best year, they broke their own sales record four times. Four times! In 2021 at the time of writing this they had broken two sales records, and it’s only April. They’ve welcomed their 100 000th Suzuki customer in South Africa too. The brand momentum will only pick up pace with this updated Swift joining the recently launched Vitara Brezza. 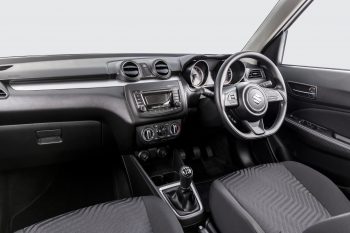 DON’T FIX IT IF IT AIN’T BROKE
The Suzuki Swift retains the 1.2-litre naturally aspirated engine that produces 61kW and 112Nm. The tried and tested power unit works for the Swift, it’s frugal too as the official fuel consumption number is 4,9 l/100km on the combined cycle. If you want more than 61kW the recently updated Swift Sport would be your car.

STANDARD FEATURES
Often a certain price point means that the base model gets very little in a bid to keep the price down. The update for the Swift includes a few standard features that have been added across the range, this includes ESP (Electronic Stability Control) to the existing ABS with emergency brake assistance and electronic brakeforce distribution, and the two airbags. ISOfix child seat anchorage points are standard across the range. New for all models are rear-parking sensors, normally a feature found higher up the price range.

Swift GA
The opening model gets the aforementioned beep-beep sensors on the rear bumper, a parcel shelf over the luggage bay to aid content privacy, and new wheel covers.

Swift GL
The mid-range model gets fog lights, two-tone colour options, and a luggage light in the boot.

PROOF IS IN THE PUDDING
There’s a reason the swift has been nominated for Car Of The Year locally and abroad multiple times, it’s a good car. It’s well built, the interior doesn’t squeak and rattle over bumps, the buttons are aligned, it’s made with care and doesn’t whiff of being made with haste like some of the competitors in this class. The honesty and simplicity of the 1.2-litre engine mated to the 5-speed manual gearbox makes driving a Swift fun, going through the bends, using the gears to keep revs in the sweet spot for a spirited drive. 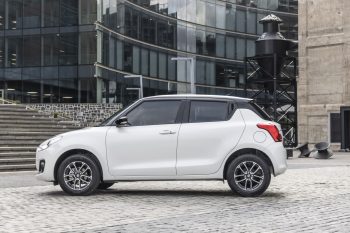 SUZUKI SWIFT PRICING
Pricing is a tricky element for car manufacturers in South Africa at the mercy of the exchange rate. One accidental sneeze of market instability and we’re paying a more money for a car that’s retailing at half the price elsewhere in the world. It’s madness, though it is what it is. And somehow Suzuki has managed to bring two of the Swift models in at under R200 000.