History Made and History Lost

It was 15th April 2019 when the world watched as flames climbed up the spire of the historic Notre Dame Cathedral in Paris, France. Now, just days after its two year anniversary, we watch the burning of another historic building. Though this one hits closer to home.

Yesterday – 18th April 2021 – was a perfect summery Sunday in Cape Town, South Africa, but while most of us soaked up the last of the good weather tragedy was blazing on the foot of Table Mountain. At 9am it was confirmed that a wildfire was spreading from above Philip Kgosana Drive in the area of Hospital Bend, heading up to Rhodes Memorial. By 5pm the University of Cape Town’s Upper Campus, whose first buildings were constructed in 1928, was alight as hundreds of firefighters battled to contain the growing wildfire. Not only was watching the destruction of these buildings close to home, for many of us the world over these buildings were a home. 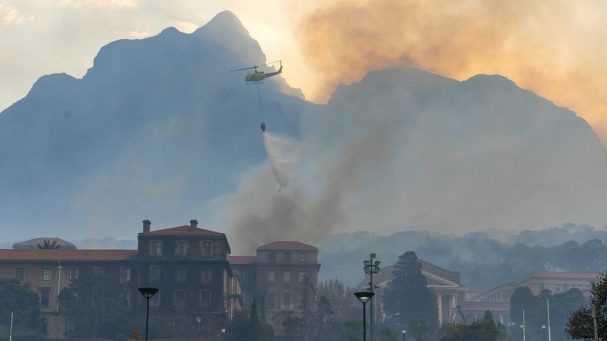 I first moved to Cape Town to study at the University of Cape Town (UCT) and was lucky enough to be among the womxn who called Fuller Hall their first home in this remarkable city. Fuller Hall is right on Upper Campus where the majority of my lectures were held, with the famous Jammie Steps behind us and the rugby fields in front of us. As an English Studies student I often found solace in the Jagger Library, spending much time writing my thesis within its walls. Along with some damage to major buildings on the campus, it is the Jagger Library that has been gutted by the fire despite extensive firefighting including four helicopters bombing water down onto the building.

Not just a beautiful building where many students like myself have carried out their education, the Jagger Library is also one of incredible history – both as a structure and in what it holds on its shelves. 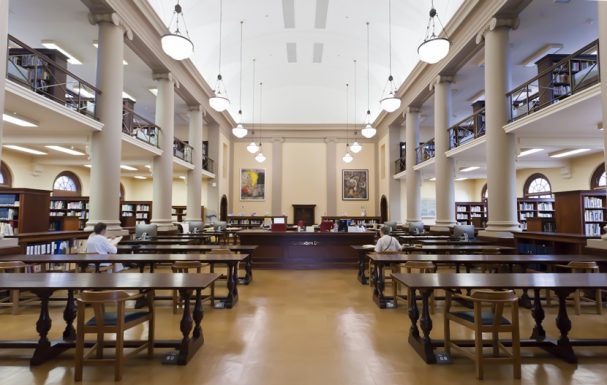 The Jagger Library was built in the early 1930s at the same time as the iconic Jameson Memorial Hall, now named the Sarah Baartman Hall, where UCT graduations have been held for years. The late Minister of Railways and member of the University Council, John William Jagger, is who the Jagger Library is named after. Jagger continuously donated to the University for 30 years, much of which was used to fund the Library. This library served as the main library of UCT until the 1970s when a need for more space to accommodate a growing collection of books and students was met with the construction of what is now the Chancellor Oppenheimer Library.

With this development the Jagger Library began its establishment as a research facility for students and staff alike, especially serving as an attractive space for post-graduate studies as it became the house of the UCT Special Collections. Though this did begin back in the 1950s with Mr R.F.M. Immelman as University Librarian, a man who the UCT website describes “was determined that the University Library would be in the mainstream of universal academic endeavour”. With his efforts, UCT acknowledge, the Library received magnificent collections “that celebrate and record man’s intellectual and cultural development and achievements”. 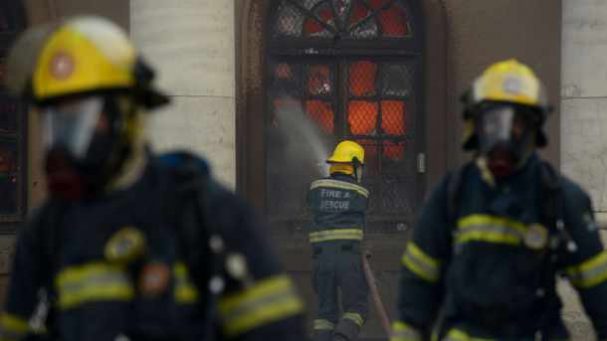 As footage of the blaze flickered across my TV screen and heartache set in, I returned to the memory of a lecturer taking us Honours students into a room which housed some of the Library’s rare books reading to us snippets from the Kipling Collection and precious texts from the Khoi-San Collection. I thought of the extensive records and archival papers that the Jagger Library housed including: a copy of a 1535 Dutch Bible (widely considered the oldest in South Africa, an edition whose publishers were condemned to death for publishing), the book titled Facta et dicta memorabilium by first century Roman historian and moralist Valerius Maximus published in 1471 by Peter Schöffer (the oldest book in the Library’s collection), the almost ancient manuscripts, and the first known book to contain photographic illustrations, William Henry Fox Talbot’s Pencil of Nature, published in 1844. 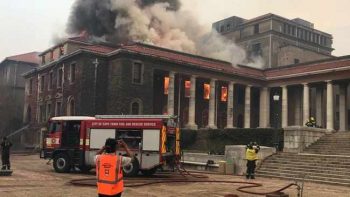 But more importantly, it is the grand African Studies Collection that sat within the Jagger Library which tells (and through the ongoing research by those at UCT still continues to tell) the complex story of our country and its neighbours, that I thought of. This collection consists of approximately 65 000 volumes of up-to-date materials, hard-to-find volumes in a range of European and African languages,as well as over 800 rare works on Africa and South Africa printed before 1925 broken into over 1 300 sub-collections.

While the fire continues to rage on across the mountain and evacuations happen across the city, it is difficult to know the full damage. Thankfully, in a statement released int he early hours of this morning by the UCT Library Executive Director Ujala Satgoor, it is confirmed that “the fire detection system in place triggered the fire shutters thereby preventing the spread of the fire to other parts of the Library”. Although a full assessment can only be carried out once it is completely safe to enter the building, it is certain that many valuable collections of historic importance and pride have been lost. 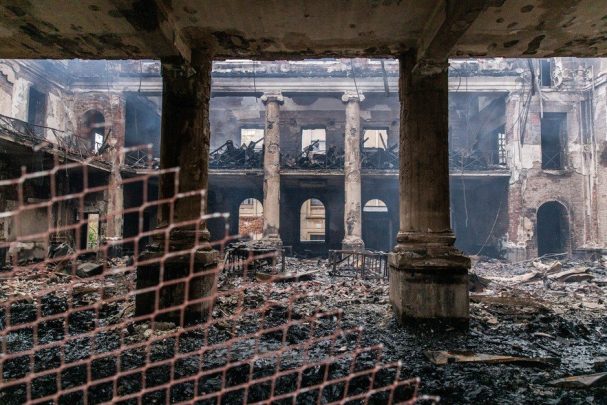 Amid all the chaos we witnessed yesterday, thousands of UCT students were evacuated from the University’s residences to safety while our firefighters continue to gain control over the blaze. If you are in a position to assist there are many ways you can.

If you can volunteer please get in touch with UCT Graduate School of Business at the V&A Waterfront (0824673029).

Firefighters are in need of water, energy drinks, energy bars and medication like headache pills, cooling cream for muscles and eye drops. These can be dropped off at the various Fire Stations though predominately the Sea Point, Cape Town, and Woodstock Fire Stations. 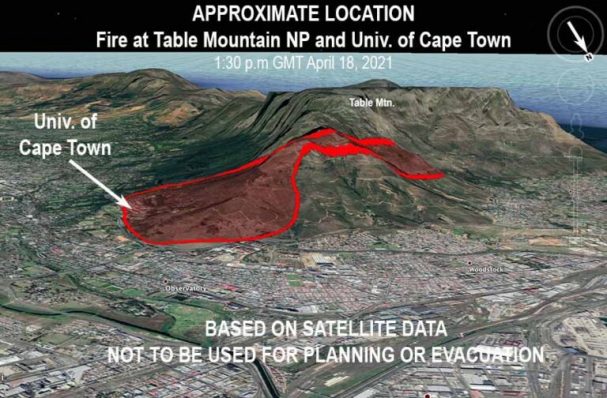 Image of approximate location of fire and fire damage (correct at time of publishing) courtesy of wildfiretoday.com